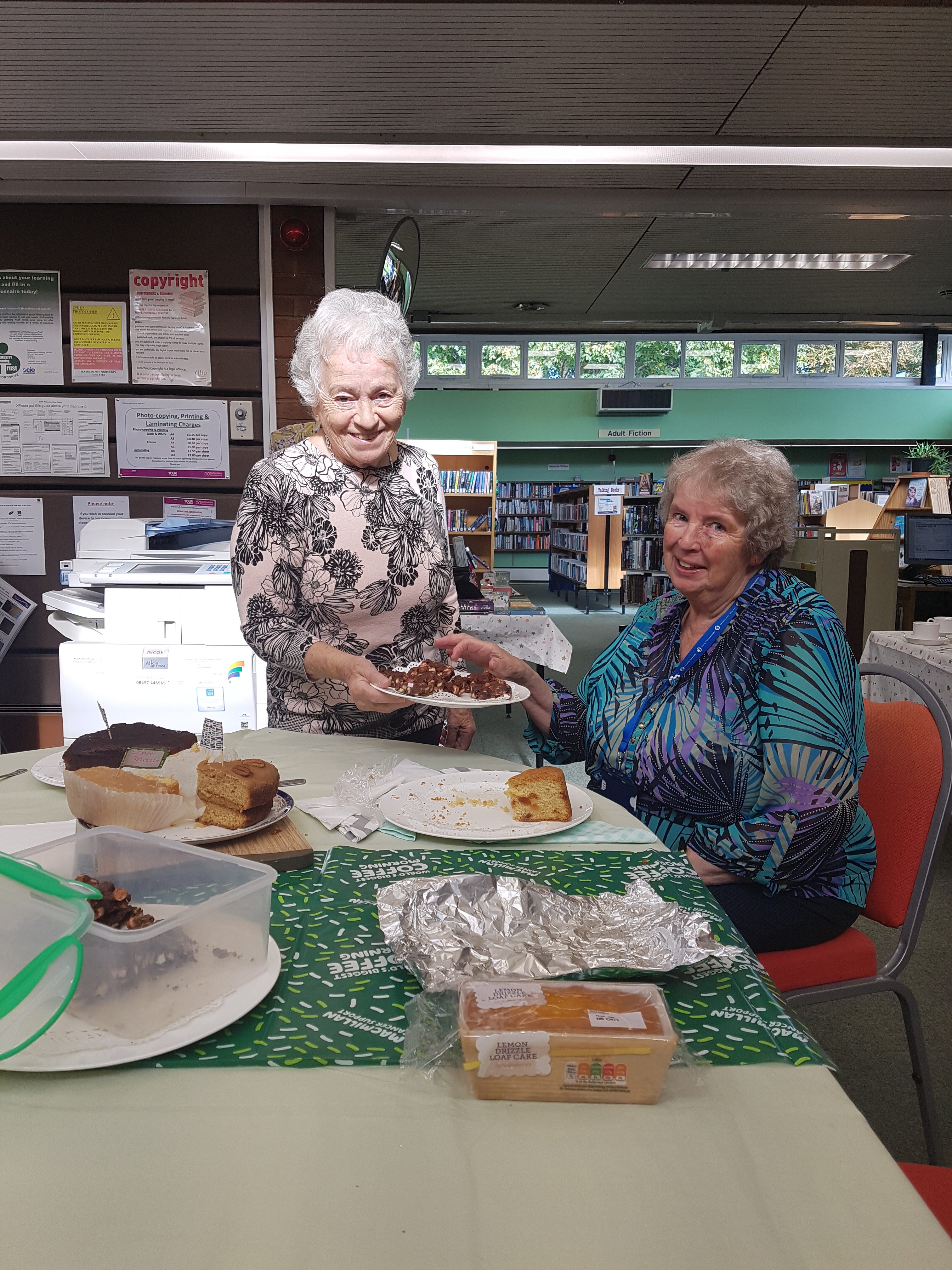 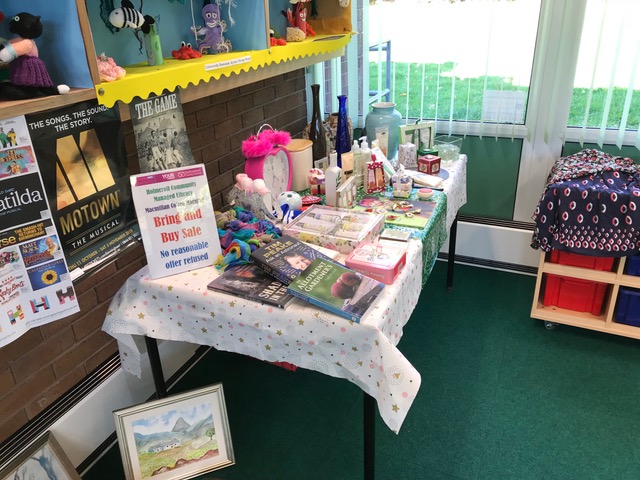 The volunteers produced a wonderful selection of home baked cakes. Baswich also had prizes from local businesses such as the local butcher, fish and chip shop and hairdressers, for a tombola and a raffle, and Holmcroft held a bring and buy sale. 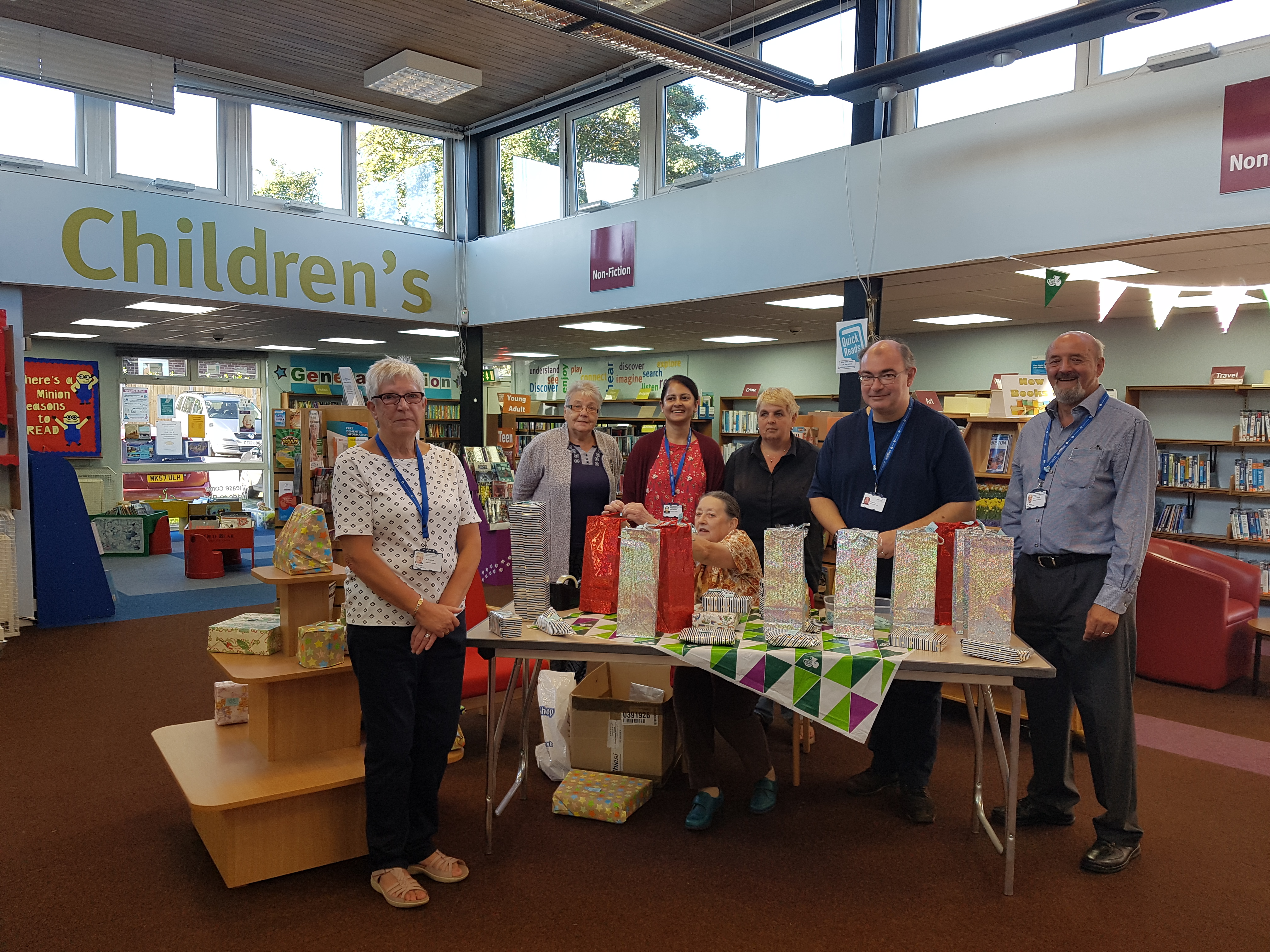 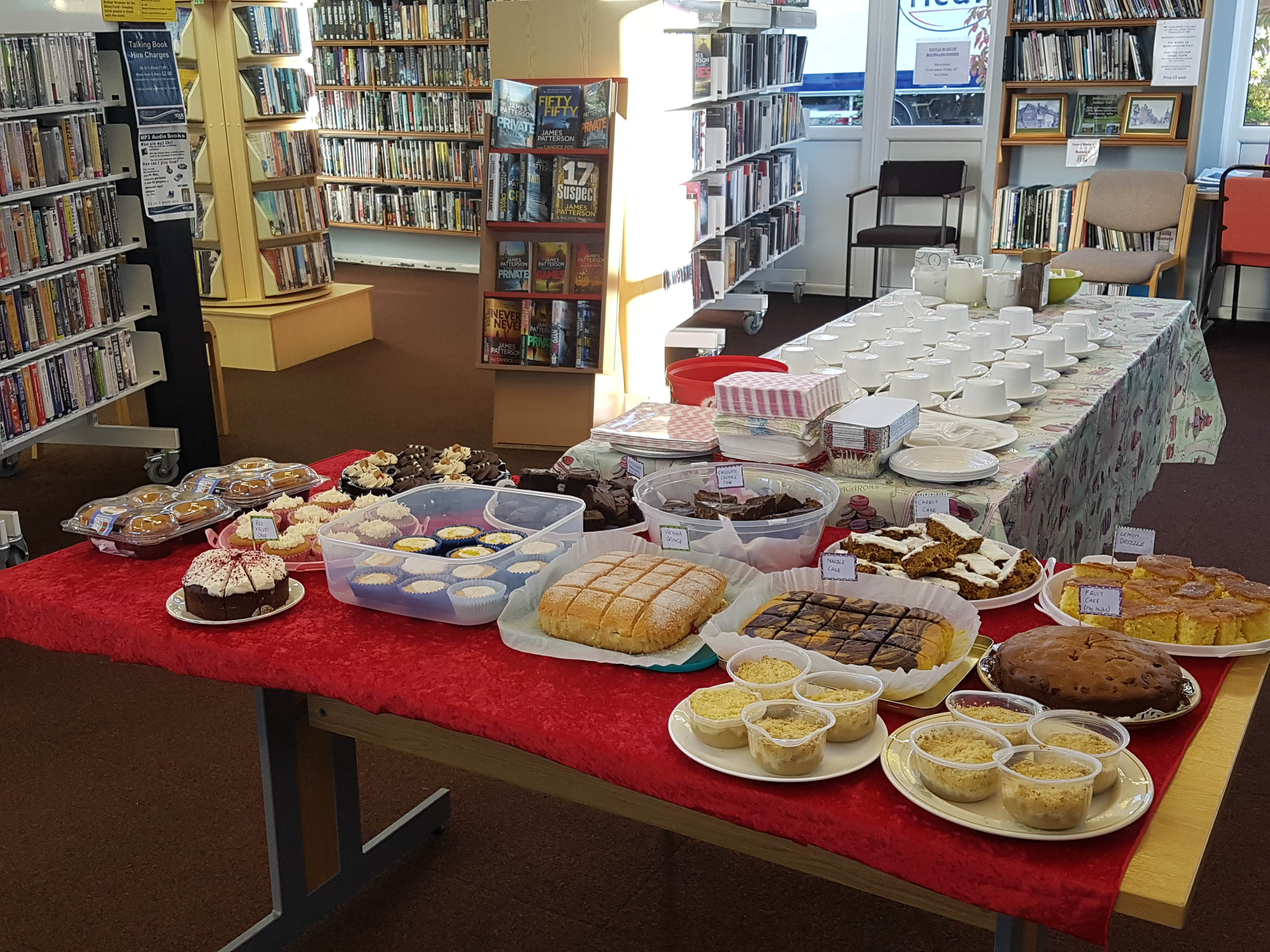 Both events were really well attended throughout the day and provided a social activity for local people to enjoy. By the end of the day, the combined amount raised by the two libraries was an amazing £738.

The photograph of Gillian Crowther from the Local Historical Society shows the weeping window display of knitted poppies. There are 84 knitted poppies, each one representing one local fallen solider, who fought and lost their life from our 2 World Wars. 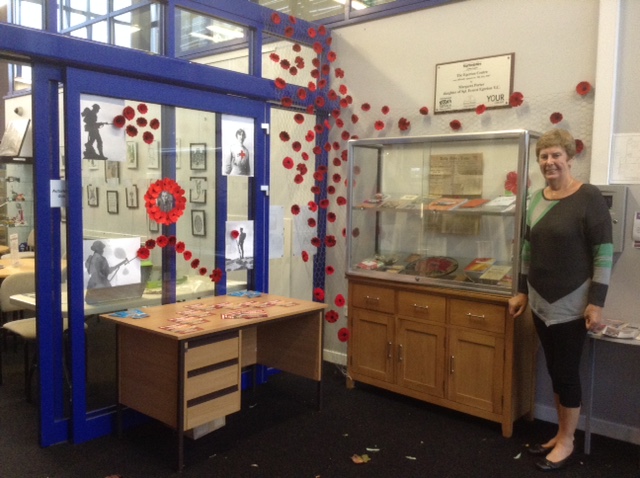 Jill, who also volunteers at the library, was the inspiration behind the knitted poppy campaign, and our very own Knit and Natters both from the centre and the community for their support.

The display was available to view until November 16th.

Blythe Bridge Rotary also hosted a fantastic WW1 Centenary Commemoration Evening on Wednesday 26th September. With practically a full house, the event was fantastically supported by Penkhull Brass Band. Talks were given by: Blythe Bridge Rotarian Bill Durose, who gave an interesting account of the life of Sergeant Ernest Egerton, whom our building is named after.

Centre stage was given to veteran Martin Ketterick BEM (British Empire Medal awarded in the Queen’s 90th birthday honours) and BLESMA member, a charity that exists to guarantee that our limbless veterans are not failed, forgotten or left to fend for themselves.

Blythe is clearly at the centre of the community and it is fantastic to see the community coming together to commemorate the WW1 centenary. The Blythe Knit and Natters and people from the local community worked together to produce a fabulous display. Blythe were also involved in county wide poppy making project and sent off a huge box to be displayed at Staffordshire Place.

Blythe Bridge Community Managed Library has its own resident artist Debbie Silcock, delivered a whole day of arts and crafts with fantastic things to make on the Tuesday morning of the October half-term holidays. Make your own unique Rubik’s cube, mug, money box, or create a T-shirt.

In the afternoon Debbie showed how to create a different sort of pumpkin using felt at her needle felting class. 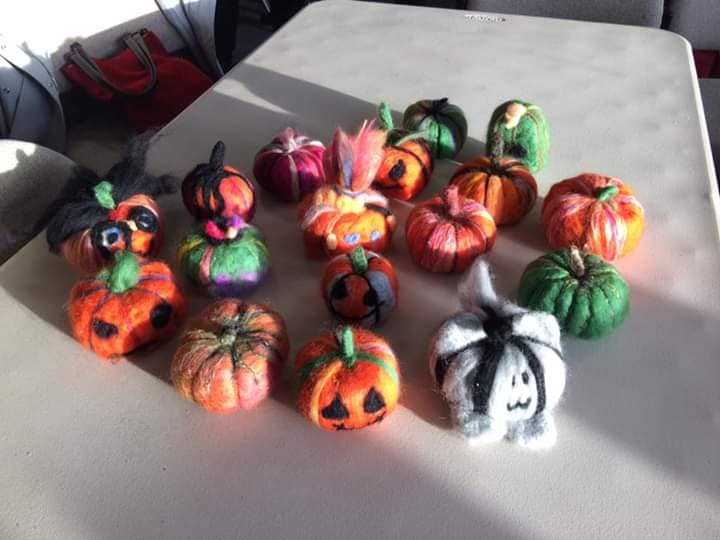 The Library benefits greatly from a local artist, who is also a volunteer, she has superb ideas and crafts to try, just take a look at the photos! These offer something for those willing to try something more complex and are quite inspirational.

Blythe Centre have some fantastic events coming up and have taken the step to advertise them in the local paper the Blythe and Forsbrook Times which was published on 7th November. The feature details the one-off events such as the ‘Crossings’ performance, wine tasting and the classic Christmas Fayre. See the feature to check out their ever growing weekly events too.

Helen Bickerton, the Chairperson of Blythe Bridge Community Managed Library, is well versed in the press and publicity field. She has recently been on Radio Stoke to champion Libraries during Libraries Week in October. One-off events are great things to highlight in the local press and can change people’s perceptions of libraries and encourage more members of the community to step over the threshold and see what their local library has to offer.

Volunteers at Kinver Community Library are always looking for opportunities to take part in activities in the local community. This has included being part of the Kinver Country Fayre last year and more recently hosting a stall at the Kinver Fete, where they promoted the library service and sold books, making nearly £50. Volunteers are now gearing up for Christmas, planning a late night opening at the end of November to coincide with the Village’s festive celebrations. 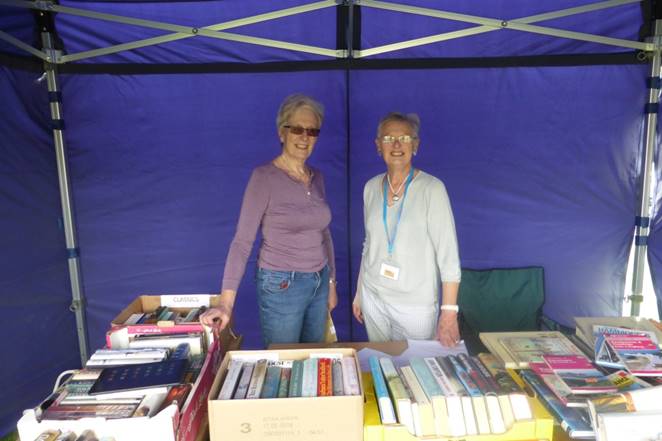 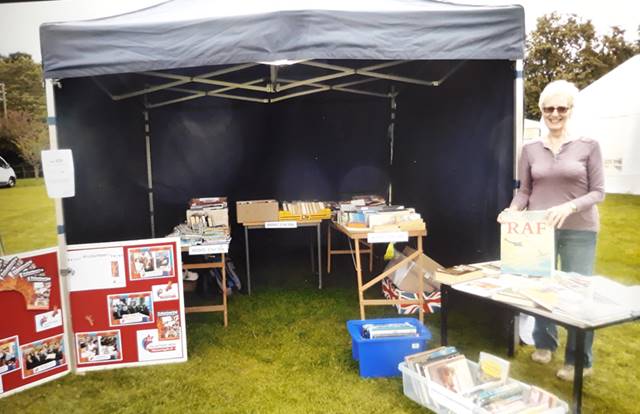 Despite the hard work sometimes involved with delivering activities outside the library, volunteers are certainly doing well to have a visible presence and promote the importance of the service to their community, showing their commitment and enthusiasm to go that extra mile.

Recently a lady came into Midlands Partnership NHS Foundation Trust Brewood Community Managed Library asking if there was somewhere quiet to take a conference call for a job interview. Ever accommodating, the volunteers on duty offered her the use of a small meeting room and when the same lady came in again with the same request, once again the volunteers on that different shift were equally obliging. On her third visit, the lady came with the great news that she’d been offered the job and a little surprise for the volunteers. 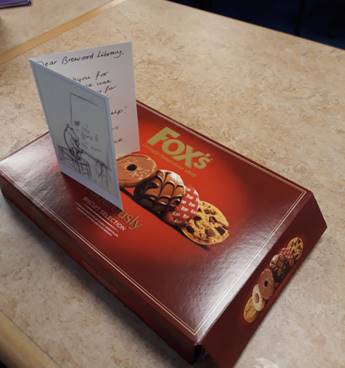 The volunteers are continually promoting and highlighting the library as a safe, neutral and welcoming hub by being flexible in using their space to meet customer’s needs and as a result of this particular action, received a lovely card and box of biscuits as a ‘Thank you’.

After nearly two years as a Community Managed Library, some of the volunteers at Kinver decided they’d like to have a bit more input in the daily delivery and planning. With support from the Committee, 12 volunteers came together to form LOG (the Library Operations Group) and various additional roles have been taken on including Poster Design, School Liaison and Display Coordinator. Some volunteers are using their existing skills to develop the service, so there is currently a Family History course running, and others have taken on new responsibilities to make local contacts to help the library, including liaising with the village high school to initiate a scheme to encourage more teenagers to borrow books. A sub group are also looking to revamp the Children’s Library, meeting to discuss layout, stock and hopefully some new furniture. 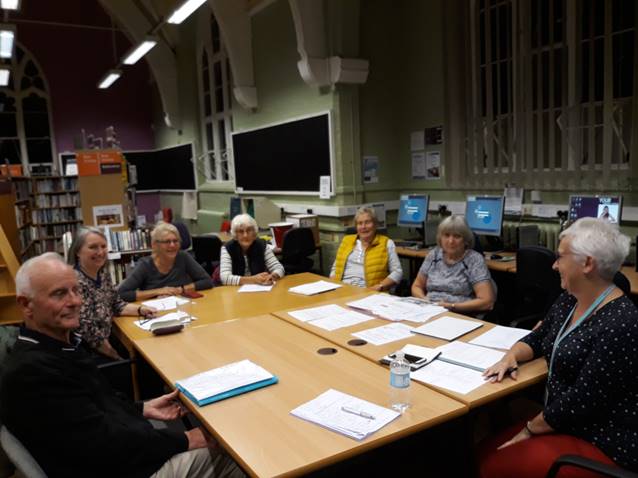 The group now meet regularly, giving more structure to planning for events and activities. This certainly spreads the work load and gives individuals the opportunity to put forward their ideas and be supported in delivering some fantastic events and initiatives.

A creative writing group, which was formed only 6 months ago by library volunteer, and member of the Friends of Stone Library Group, Lisa Culligan, is continuing to grow and develop!

The Stone Scribblers now have 19 group members and each meeting around 12 members attend to gain inspiration, and share work in progress, for feedback and critique. By popular demand their meetings have now increased to twice a month, on the 2nd and 4th Tuesdays at 10.30am. 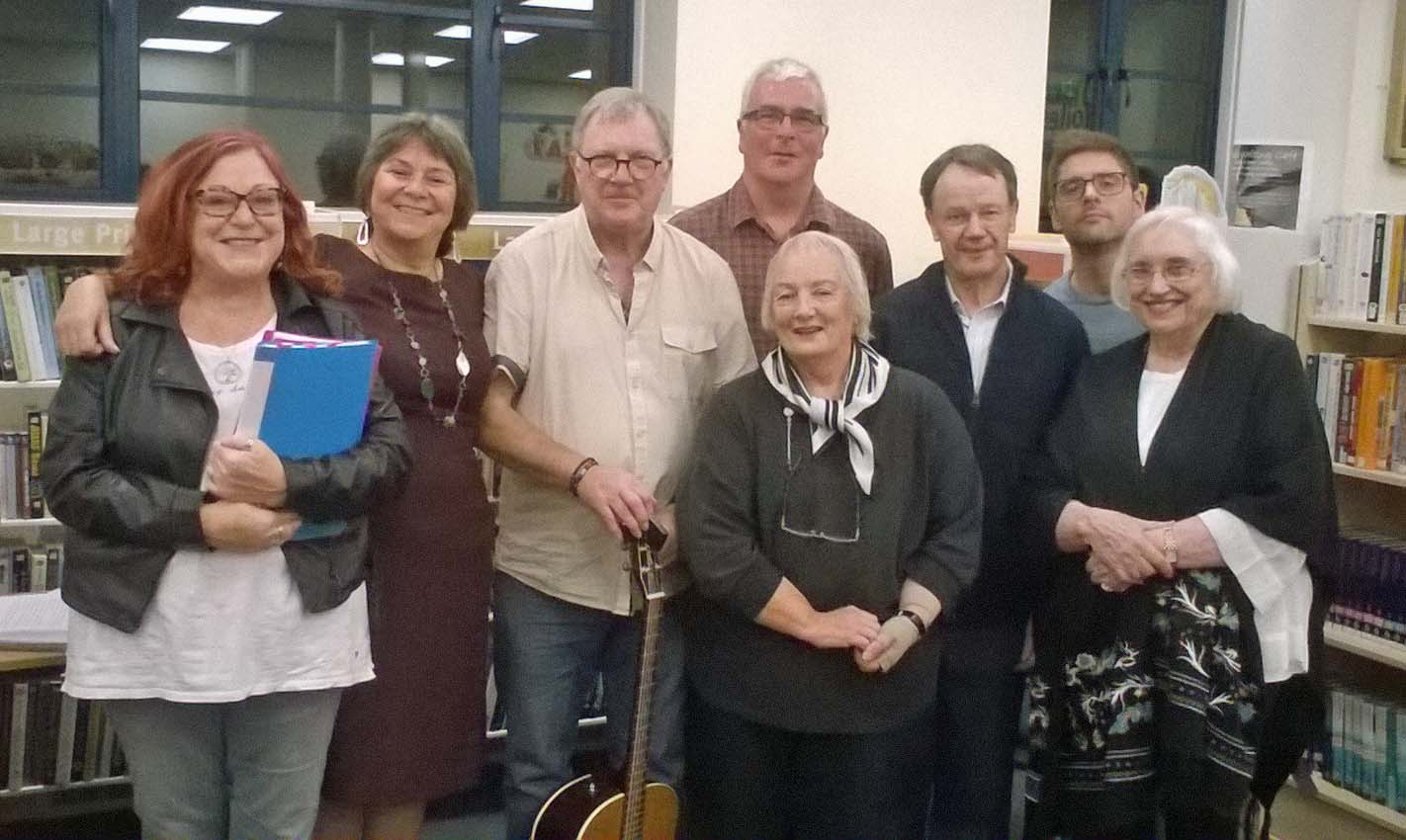 On 10 October, the Scribblers held their first evening of literary and musical entertainment at Stone Library. Original work of prose and poems was presented by the writers and there was a musical interlude too. The Scribblers range from novice writers through to published authors and poets. They are an inclusive and welcoming group and new members are encouraged to come along and enjoy the supportive atmosphere.

This group is a great example of how the interest and enthusiasm of a volunteer has turned into a thriving library activity. Lisa has an interest in creative writing and approached the library to ask if she could volunteer to run a creative writing group. Her enthusiasm also led her to be a member of the Friends of Stone Library Group, through which she plays an active part in supporting and promoting the library.

CSO, Helen Farr has set up 2 Friends of the Library Groups at Stafford and Stone Libraries, with local library staff, and these are already contributing to the promotion of library services in those areas. 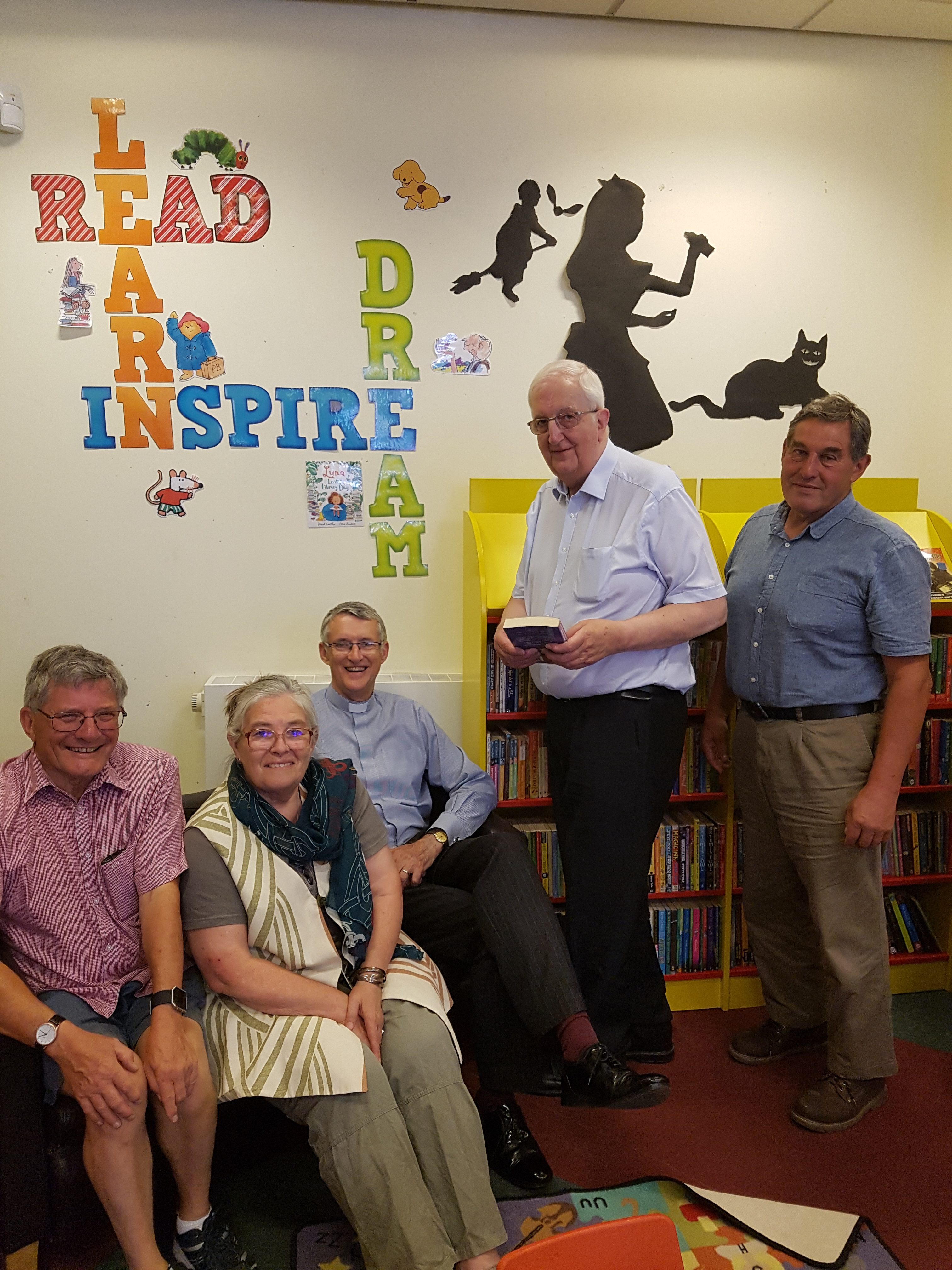 In Stafford, a new social group for people who have English as a Second Language to meet and practice their English speaking skills has recently been started. In Stone, one of the Friends has put library information in the local Parish magazines, which will go to 4,100 homes, and the group are also arranging talks at the library; on Friday 28 September one of the Friends gave a local history talk to 20 people on “How Stone was affected by the Great War, 1914 – 1918”.

The Friends Groups are contributing to the development of the library service for their local communities and acting a advocates through their wider community engagement and awareness raising.

Happy to support a new venture, Cheslyn Hay Library has been the venue for some recent Crochet session. Supported by tutor Emma, the ladies, all novices have been keen to learn this craft. Feeling both pleased with their new skill and surprised by what they have achieved, over a period of 4 weeks the ladies have learnt basic stitches and how to follow a pattern in order to create a beautiful Dragonfly Blanket. Starting with comments like “I’ll never be able to do that” to “Look at what I’ve made”. 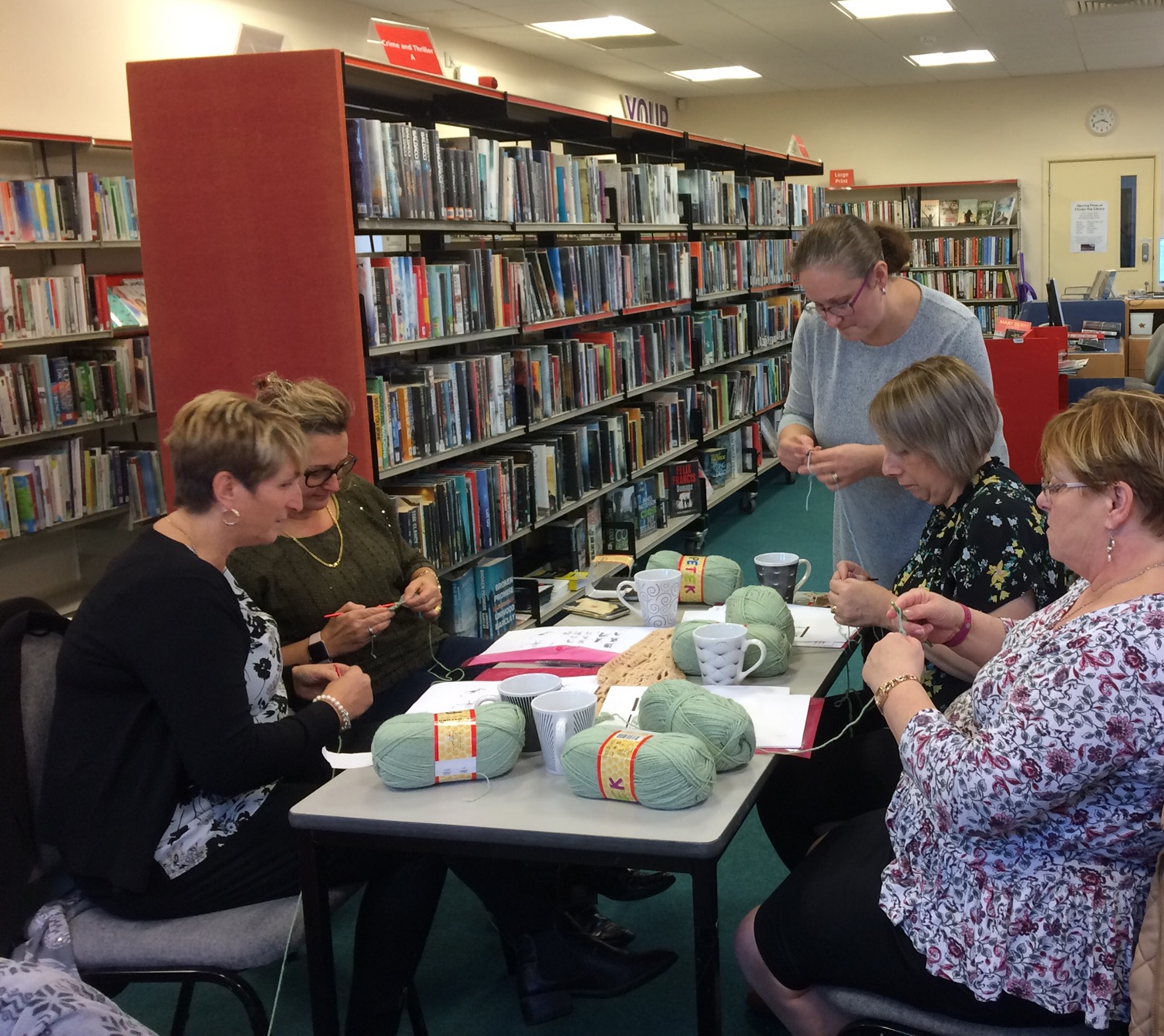 The first course proved so successful that a second course has started, it is hoped this will result in a regular Crochet Group developing at the library. 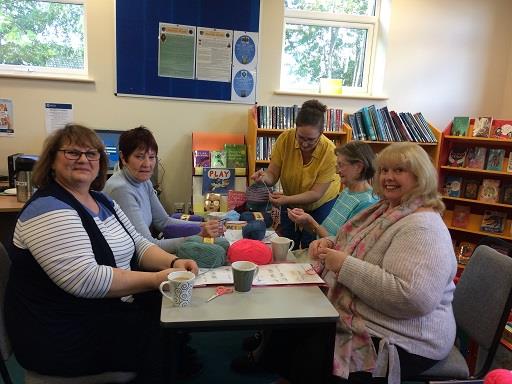 People are keen to learn new skills and the library can be a great venue for this to take place. The courses have been well received within the community and have been friendly and social with both laughter and learning.